A California Ground Squirrel Family Experiencing the "Trials of Life"

It's now June 15th and all has settled down, but a week ago or so there was high drama surrounding a mother California Ground Squirrel and her offspring who live among the boulders outside the house, in perfect view from the living room window. 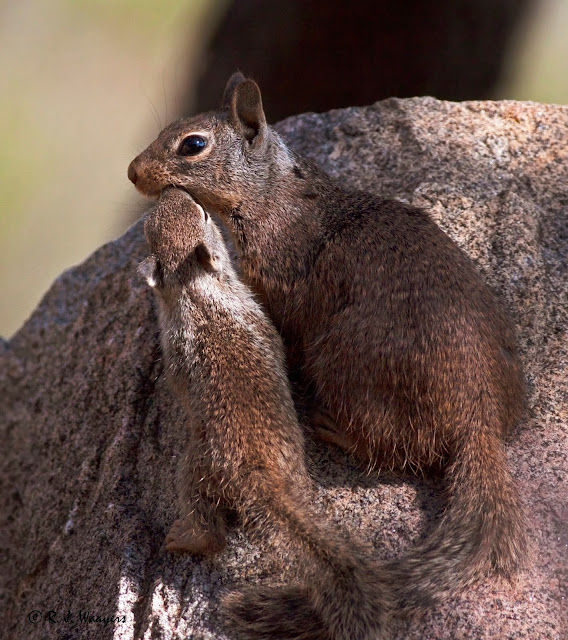 Around June 1st, we first noticed some very young ground squirrels tentatively venturing from a hole at the base of some rocks to the south of the house. We could see them clearly from the upper storey, and I commented to Gary that it must be tough to live with the local snakes, which to them would seem like truly massive serpents. And then Gary said "Like that one?", and sure enough, there was a large Southern Pacific Rattlesnake gliding along, moving in the direction of the burrows. Within a couple minutes it had arrived and entered one of the burrows.

The mother squirrel, obvious from her enlarged nipples, vigorously tail-flagged (whipped her tail from side to side) to distract the snake, and possibly lure it towards her. Apparently California Ground Squirrels can direct warmth into the tail through shunting blood there, possibly to appear bigger, and I would postulate to attract a thermal-sensitive snake like a rattler. Research has shown that the squirrels do NOT direct warm blood to the tail when confronting a non-heat-sensitive snake species!

Eventually, but fairly soon, actually, after entering the burrow, the snake exited again. We assumed that it had not consumed any pups, as that is typically a fairly long process.

The mother squirrel was seen carrying some of her pups to the west, to another burrow, presumably. She carried it with the pup curled around her face, and completely immobile, unlike a dog or cat which would carry young by the scruff.


The snake left the scene later and the family seemed to settle down.

This scenario played itself out for the next several days, with the snake visiting and the mother squirrel becoming highly agitated, tail-flagging and sometimes relocating her pups.

One time we thought we might have seen five pups, but the fifth is uncertain. We did see four pups repeatedly, though, and that remained constant as the days passed. The snake never seemed to really get a meal from among the young squirrels. One day, TWO rattlesnakes showed up, each one disappearing down a burrow! The number of pups still remained at four (which is a small litter, as this species goes, and may reflect earlier losses that we did not observe). In between snake visitations, the squirrels were highly photogenic and often could be photographed from the living room through the big window. Sometimes the pups would allow photos to be taken of them as I hunkered down on the concrete walkway around the house outside. First, a variety of images of the mother on the boulders. Flies seemed ubiquitous. She has an odd, almost shaved look about her "mantle", with the fur on her shoulders being shorter than that further down her back, creating a black line where the black bases of the hairs are visible. She is also "redder" in coloration than many ground squirrels of this species are. 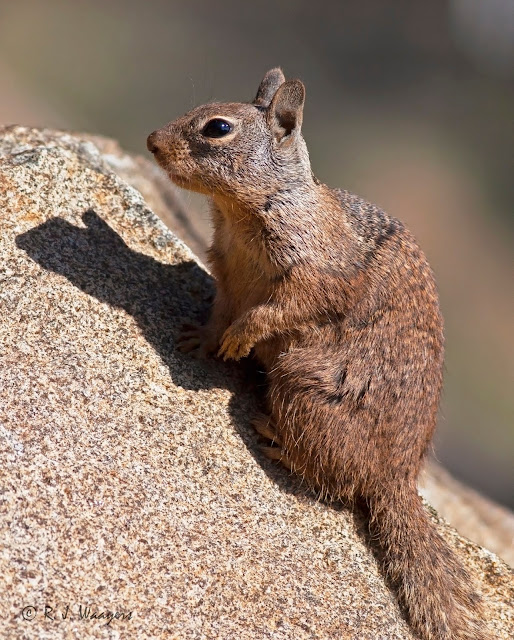 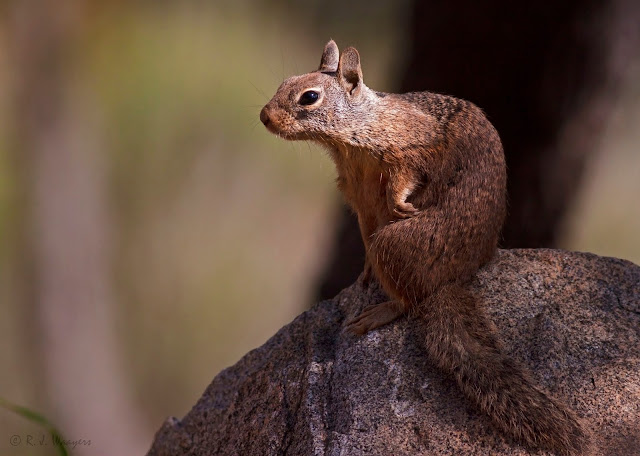 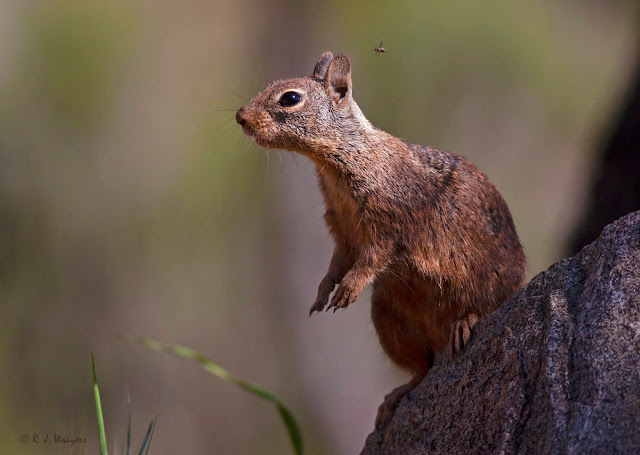 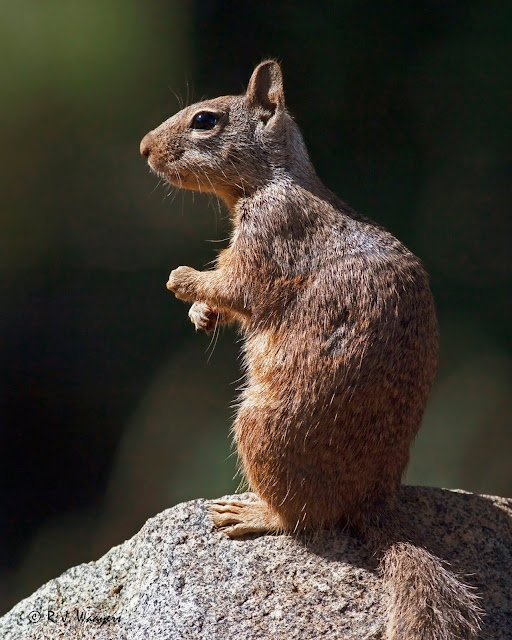 Here are some of the pups on June 1:


On June 2nd, when the snake was not present, the pups were becoming more bold and photogenic. 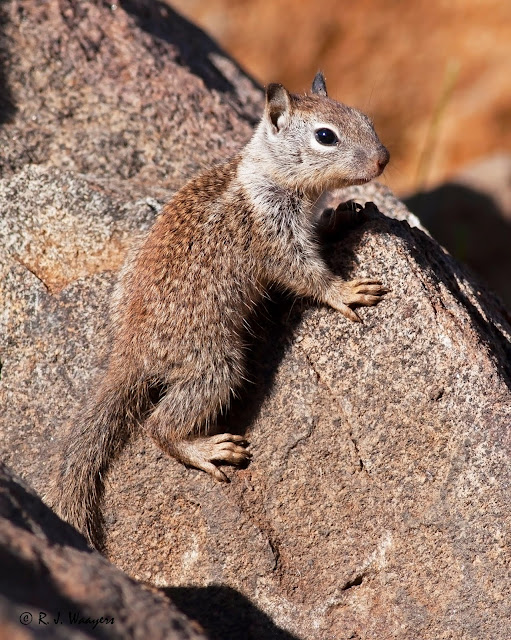 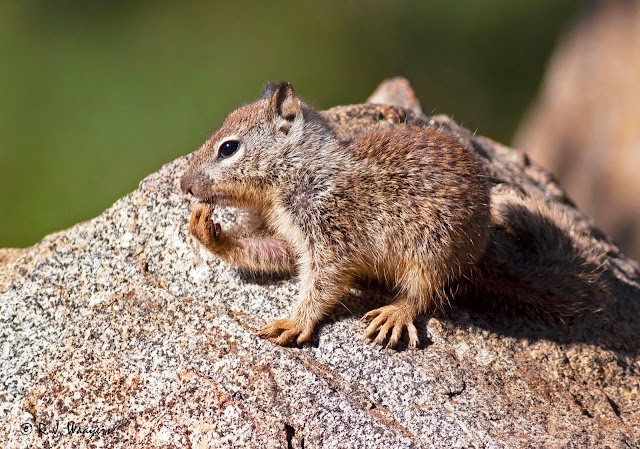 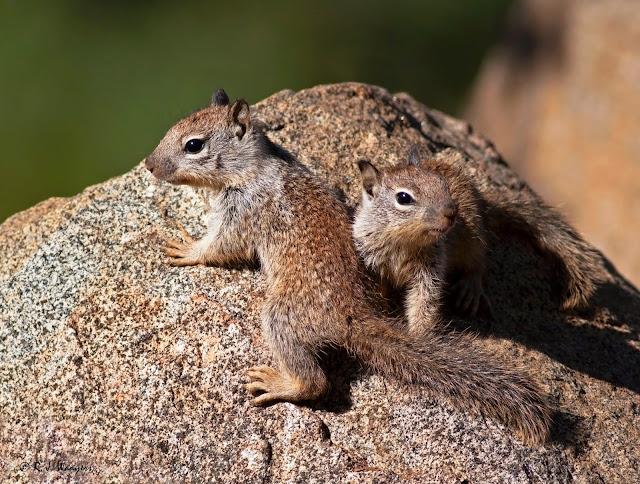 Over the next couple days I was unable to photograph the family, but did see the snake visit each day.

On June 5, I was able to do some more photography. There was a snake visit, and I managed to capture the mother just a few inches from the head of the rattler, which is emerging from her favored burrow between the two bigger rocks.


In the afternoon, after the snake had departed, the pups and their mother spent some relaxed time on the rocks. There is one pup who seems a bit bolder than the rest, and that pup interacts with its mother quite a bit. Flies were still very numerous.


The pups were out on the rocks quite a bit and easily photographed through the glass of the window. 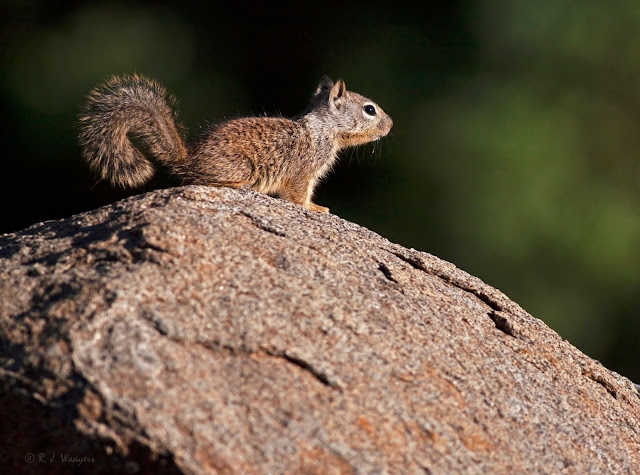 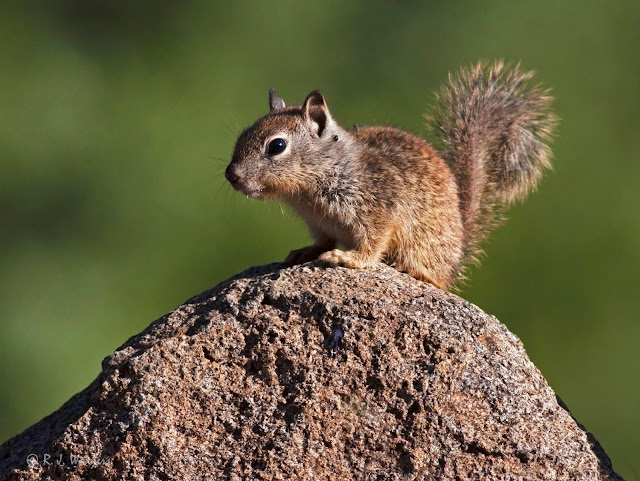 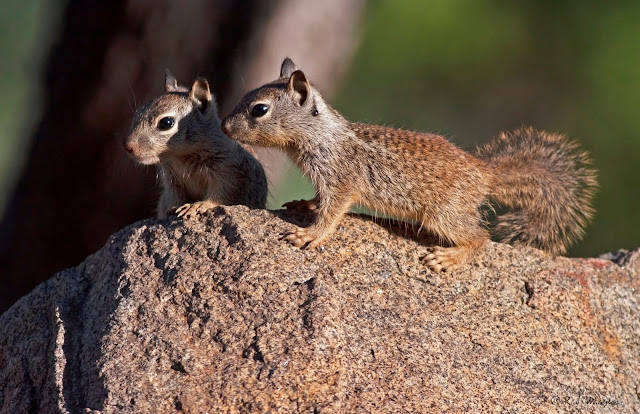 Here is the mother with her nipples visible. The pups tentatively ate grass, but I suspect they may still have been nursing. 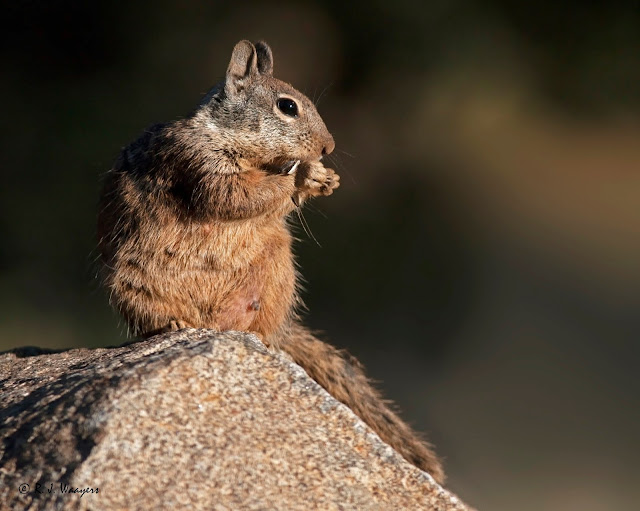 On June 6th, the babies were active in the morning and allowed me to photograph them from the sidewalk. The "bold baby" spent some time by him or herself on one of the bigger boulders and struck some awfully cute poses. The pups seem to yawn and stretch quite a bit. 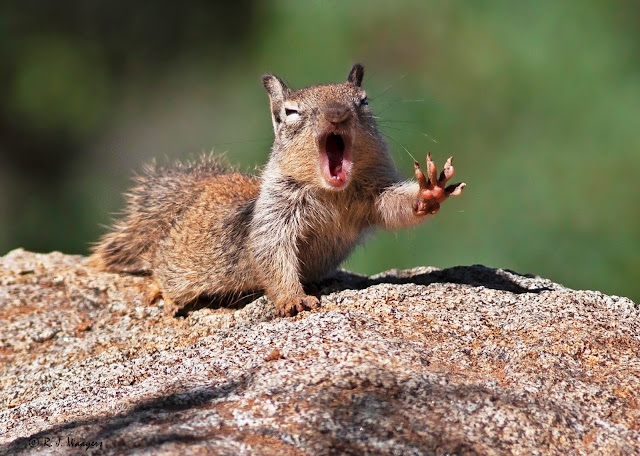 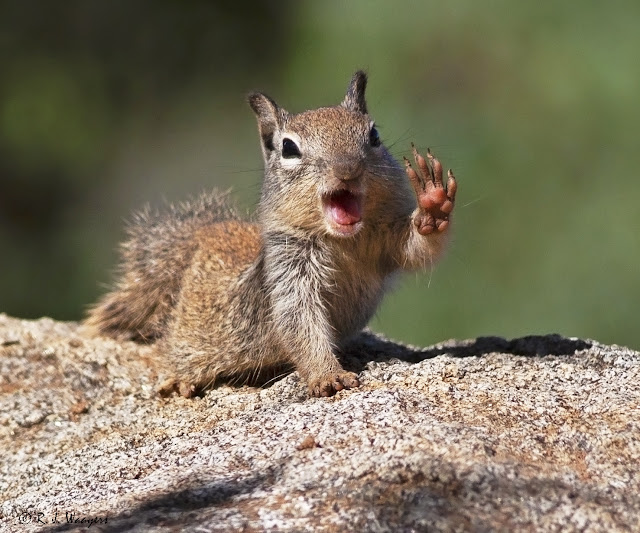 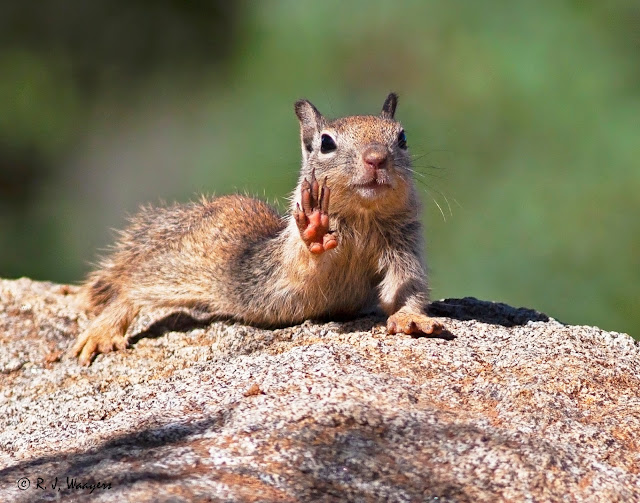 They also scratch quite a bit - they are attractive to flies, and likely have fleas. 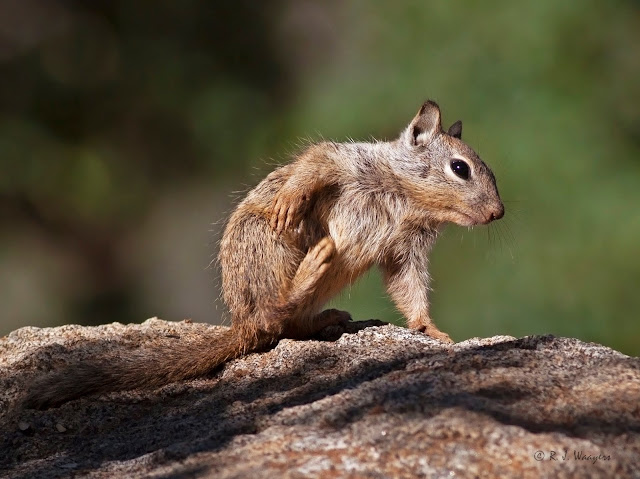 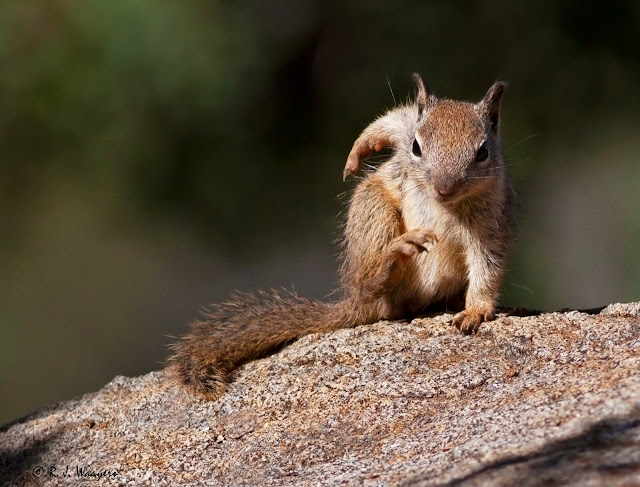 The bold baby also climbed one of the small oaks near the boulders. 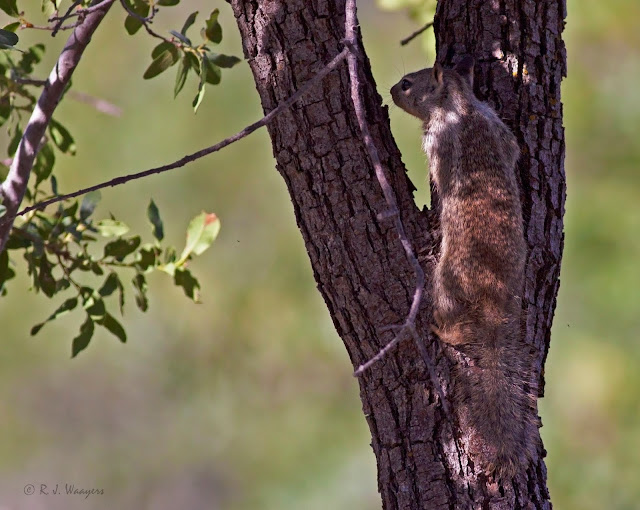 Only a couple days after these photos were taken the family seemed to disappear, but then reappeared again by the mother's favored burrows. As of the 15th they are still active outside our living room window and we have not seen a snake in quite a few days!

Posted by Robyn Waayers at 4:06 PM