For the past several weeks we have seen a doe with twin (spotted) fawns on or near our property, usually several times per week. The doe is unusually "reddish"-hued, so easy to recognize.

Last weekend we were outside doing various small projects and the trio were nearby browsing on vegetation. A sudden noise startled them, and I saw one fawn move downhill while the doe and second fawn went in the opposite direction. Later that afternoon, at dusk, we saw a single fawn in the landscape slowly moving uphill towards a neighbor's property. Then about ten minutes later, we saw the doe and single fawn walking in a very different direction! What could be done? Nothing of course. We could only let nature take its course and hope that the lost fawn would find its family again.

Come Monday, I looked out a window and saw an adult deer with a spotted fawn. I looked more closely to see if there was a second fawn, but it didn't appear that there was one. Then upon craning to get a better angle...there it was - the second spotted fawn. The family did reunite.

I captured one photo of the three of them as they wended through the landscape. One of the fawns is right in the middle of the picture - well camouflaged.

Monday and Tuesday (and a little bit on Wednesday), we had a fantastic drenching from the remains of Hurricane Paine. It didn't bring us any "paine" - just MUCH-needed precip! In the end we received a little over an inch - a lot for September. Many local trees and shrubs were getting stressed from almost four months with virtually no rain, so this might take the pressure off them for a little while, anyway.

On Wednesday, I saw a vigorous-looking yellow mass popping out of a tree on our walk. Today it had matured a bit more - a shelf fungus. In general there don't seem to be too many other fungi popping up, though.

For comparison, here are photos of the eastern Laetiporus sulphureus ("Chicken of the Woods). This was a massive fruiting body that I found on our short stay at Kilen Woods, Minnesota, back in 2012. 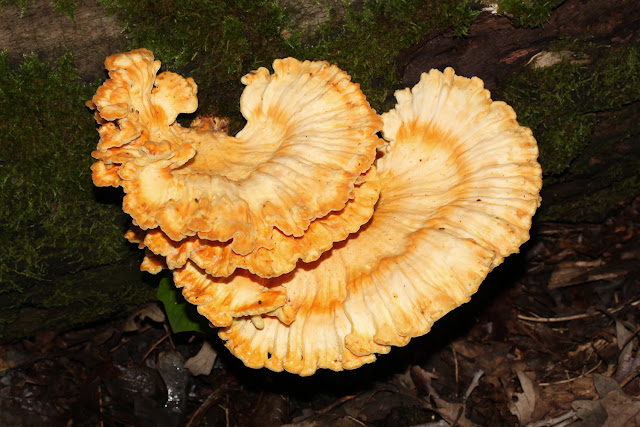 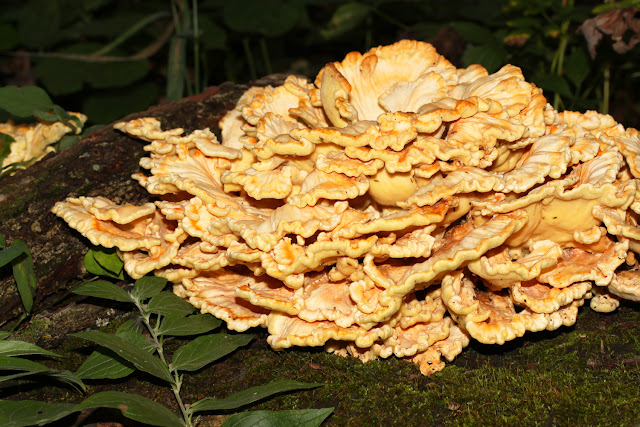 Posted by Robyn Waayers at 5:22 PM