Dr. Art Evans paid a visit for a couple days, and we spent some time in the field, primarily looking for species of value for his upcoming western beetle book.

One the first night at my patio black light, one of those rarely seen prionids, Tragosoma pilosicorne made an appearance. This is only the second individual of this species that I have seen here.

On the way back from a drive out to the In-Ko-Pah area on the border of San Diego and Imperial Counties, we checked out Boulder Creek Road near McCoy Ranch Road and found several Onitis alexis under cow patties. Never a common dung beetle in my experience in San Diego County, but I have observed it in quite a variety of locations now: Rancho Bernardo, Lake Sutherland, Ramona, Lake Henshaw and now in this latest locale.

This small orb weaver was spotted after dark on my property as we looked for nocturnal species.

On the second day we explored the San Felipe Creek area. Quite a few hymenopterans and dipterans were out at the Eriogonum blooming near the creek in one spot. Macrosiagon sp. (likely M. cruenta) were present in the blooms also. This family of beetles lay eggs in flowers which hatch into small larvae. The larvae then hitch a ride to the nest of bees or wasps that visit the flowers. Then the beetle larvae parasitize the early larval stages of the hymenopterans. 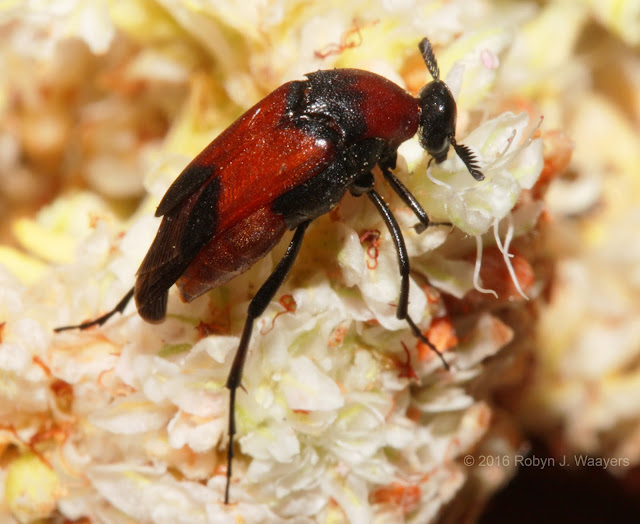 On the way out of the desert a dead deer presented itself along the road. Art stopped to look for dermestids and histerids, and was rewarded for his efforts. Why let a little smell deter one from the possibility of interesting beetles! 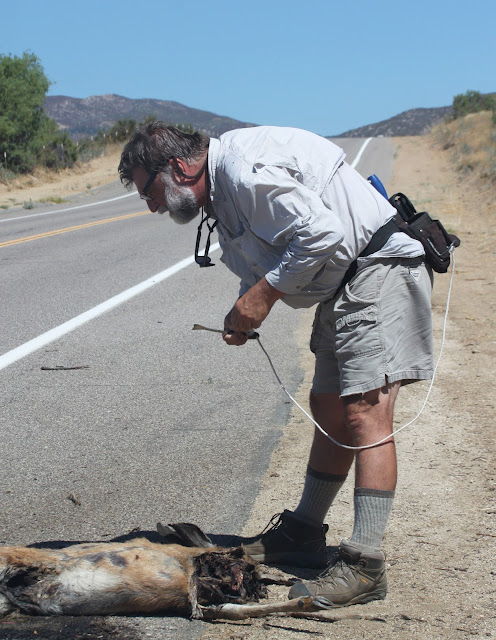 Posted by Robyn Waayers at 2:43 PM