The "Big" Year That Wasn't

So our trip to New England which would have provided a nice array of eastern birds didn't happen, and I stayed at home much more than expected.

In the end I totaled 224 species for 2020, which for ME is actually not bad, considering that fact that I only bird sporadically in a given year.

Here are a few of my favorite bird images taken in 2020:

Posted by Robyn Waayers at 3:57 PM No comments: 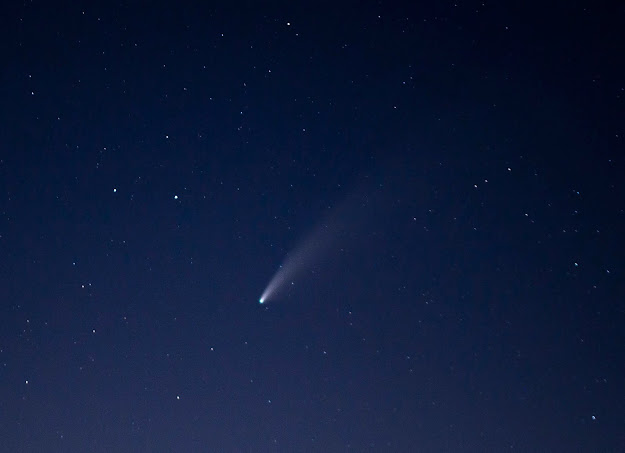 Posted by Robyn Waayers at 9:59 PM No comments:

Those Orange-hued Hummingbirds in The Cuyamacas

Back in March and April, after the pandemic was in high gear and I was home virtually all the time, I saw many Selasphorus sp. hummingbirds - with plenty of Rufous Hummingbird males making ID easy - at my feeders. The peak number seen was 6 individuals on April 2 - all Rufous Hummingbirds, with five males and one female, identified by her notched tail feathers as described in Sibley.

The second highest number was four at once seen on March 6, almost a month earlier.

These were individuals heading north to their breeding grounds in the Pacific Northwest from Mexico.

These Selasphorus sp. hummers come to mind as I saw a Selasphorus hummer today, but only had a brief view, and could not even determine its sex, let alone species. But they are back, it seems, with some southward movement not too unusual in summer here.

Here are some images of the Rufous Hummingbirds seen in spring here in Cuyamaca Woods, in somewhat chronological order.


Posted by Robyn Waayers at 4:27 PM No comments:

Hummingbirds Galore in the Cuyamacas

This post is a modified version of an article I wrote for the Cuyamaca Woods Property Owners Association newsletter on March 8, 2020.


It may still technically be winter (as of this writing) but we have no lack of hummingbirds here in Cuyamaca Woods. I took my hummingbird feeders down last fall in anticipation of winter, snow, ice and generally hummingbird-unfriendly conditions, as many people do who live in northern climes. But I noticed a male Anna’s Hummingbird on and off throughout the cold and stormy times, seemingly never really absent (although I did not keep formal daily records!).

The San Diego County Bird Atlas (Philip Unitt, 2004), describes Anna’s Hummingbirds as less abundant in dry natural habitats in late summer and fall, and there is evidence that some migration to Arizona can happen then. Following this time, Anna’s Hummingbirds typically increase in the mountains in December and January.

Here are some images of Anna's Hummingbirds taken here in Cuyamaca Woods in recent months:


I put my nectar feeders back out around the beginning of March and immediately saw a male Anna’s visiting. Then by Friday, March 6 and the subsequent weekend, more and more Anna’s were seen, peaking at about seven individuals. But simultaneously the “word” got out even further and Rufous (and possibly Allen’s) Hummingbirds showed up. On Mar. 6 at dusk, four orange-backed male Rufous Hummingbirds clustered around a feeder right at dusk, fueling up for the night. A male and a female Rufous/Allen’s appeared earlier on that day (these two species are hard to distinguish in the field when dealing with females or males with greenish backs, as this male had).

These Rufous and Allen’s Hummingbirds are migrating north from Mexico to the northwestern U.S., W. Canada and S. Alaska! On their way north, they typically stay further west; thus we see them more on this northward leg of the round trip. When they return south, they usually pass over the Rocky Mountains in the interior west, so we see fewer of them here during the summer.

Other hummingbird species we might see at various times in Cuyamaca Woods include the Costa’s Hummingbird, males of which are bedecked with a flamboyant purple gorget (head feathers), and the Black-chinned Hummingbird, males displaying black on the chin and lateral sides of the face, with a purple band on the neck. The much less frequently seen Calliope Hummingbird might make an appearance here in spring. This species shows a migration pattern similar to the Rufous Hummers, described previously. I have only seen this species once, in summer in southeastern Arizona (Portal). I am hoping for one this season at my feeders!
Posted by Robyn Waayers at 2:25 PM 1 comment:

I decided to make a day of it - a whirlwind tour of (some) of the more interesting local birds, to give a boost to my year list.

I visited the Poggi Creek greenbelt in Chula Vista (for the first time ever) in the morning to try for decent lighting on what I hoped would be cooperative rarities (the Thick-billed Kingbird and the Scissor-tailed Flycatcher). The morning was sunny, mild and essentially perfect. On initially searching the wide grassy area between housing developments, I found Cedar Waxwings in the tall sycamores. The Cassin's Kingbirds were noisy and active. After wandering a bit further south, I heard an odd, kingbird-like call and quickly spotted the hefty Thick-billed Kingbird in a smaller tree. It proceeded to move about in a small area, seeming to favor the tall sycamores for hunting from. A few moderately decent images were captured. A nice lifer!

The Scissor-tailed Flycatcher was more elusive and I would not have seen it at all if not for a fellow birder who spotted it after I had wandered quite a bit further south, then turned back north (thank you Roger U.). It was perched far up in a tall tree, easy to recognize, but then flew off before I could get an image of it.

Then I headed to the baseball fields just S. of Nestor to see Vermilion Flycatchers if possible. I only found a female, but she was very calm and allowed easy photos as she hunted.


Next came Imperial Beach and in the end I only visited the pier to see possible loons that had been described as being there by a fellow birder. I did find two Red-throated Loons and a Common Loon that appeared to be molting into breeding plumage. Pelagic Cormorants were loafing on the S. side of the pier, near the restaurant at the end.

Then I visited the San Diego River mouth at Robb Field and saw a Little Blue Heron, a Reddish Egret and Blue-winged Teals, all year birds.

I check a couple other locations, but found not other birds for the 2020 list (including NO Black Skimmers on the NE corner of Vacation Isle).
Posted by Robyn Waayers at 4:11 PM No comments:

A Lewis's Woodpecker at Stonewall Mine

There have been reports of this species from the past four to five months near Stonewall Mine in Cuyamaca Rancho State Park on eBird. Perhaps it is the same individual or individuals wintering here, or not. There's no way to tell for sure.

I decided that it would be nice to see one of these uncommon birds and get it on my year list, so I drove over to Stonewall Mine to try to find it. I saw one individual well, and a possible second bird near the first. The single bird that was easily observed was fly-catching from perches in one large pine, and at one point pecked in between the scales of two different Jeffrey Pine female cones. The literature reports low percentages of "seeds" in the diet of these birds, so I thought it would be interesting to show the imperfect images I captured of this behavior - taken from quite a distance away.

Here is an image of the pine, right in the middle of the frame:

Below are images of the bird pecking one pine cone, then flying to a second, and then perched over the second. The three most likely explanations for the behavior to me are either consumption of the pine seeds, or searching for/consumption of insects hiding in the cone. Consumption of sap seems much less likely as the literature indicates that sap is not a significant component of this species' diet.


These are beautiful birds and it's a treat to see them living their lives here in our local piny woods.

Posted by Robyn Waayers at 2:02 PM No comments:

Birding Year Update as of January 31.

Being busy and starting up teaching again makes it harder to see birds, but I have managed to get out here and there, and have increased my year total SLIGHTLY.

On January 23, a day involving a trip to La Jolla and then later to Lindo Lake in Lakeside yielded species like Brandt's Cormorant, hard (for me) to find outside of La Jolla, and a Wandering Tattler - a nice bird to be sure!

Also other birds, including extremely common species were seen and photographed.

A few of those images below.

Posted by Robyn Waayers at 4:40 PM No comments: